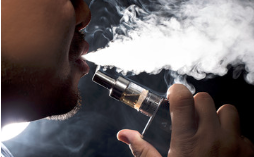 Often resembling USB flash drives and coming in a variety of flavors, including various candies and fruits, e-cigarettes have soared in popularity among teenagers in recent years. In fact, e-cigarettes are the most commonly used tobacco product among middle and high school students – with the variety of flavors cited as one of the top reasons for use.

That is the reason why Senators Dick Durbin (D-IL) and Lisa Murkowski (R-AK) announced planned legislation earlier this month that will regulate e-cigarette flavorings. The “Stopping Appealing Flavors in E-Cigarettes for Kids” (SAFE Kids) act would require vape manufacturers to prove their flavors are not harmful, don’t coax children into nicotine use, and are actually beneficial in helping adults kick their smoking habit.

If vape and e-cigarette “juice” manufacturers can’t prove those three things, then their product won’t be allowed to stay on the market. This is the latest attempt by Durbin to keep America’s youth from using vapes,  which he has dubbed “candy flavored poisons.”

“I am convinced that e-cigarettes represent the ‘re-invention of smoking,’ cooked up by Big Tobacco to hook a new generation,” Durbin said in a statement on his campaign website.

Durbin and other public health experts are worried that children and teens will be attracted to vaping because of the variety of flavors, only to get hooked on the nicotine they contain. A study by the American Journal of Preventive Medicine found that people generally don’t start vaping with liquids that mimic the taste of real tobacco, but rather choose something fruity or sweet. However, adults second and third preferred choices were tobacco and menthol; unlike children whose top preferences were all sweet candy-like or dessert flavors.

It is important to note that this is not the first time lawmakers have worked to regulate flavored tobacco products. In 2009, the FDA banned all flavors except menthol for traditional, combustible cigarettes, and the ban worked. After the ban was enacted, teens became 17% less likely to become cigarette smokers according to another study published by the American Journal of Preventive Medicine. However, at the time, the FDA did not have the authority to regulate cigars or e-cigarette flavorings.

In March 2018, the agency started to investigate the safety of e-cigarette flavorings and whether they actually helped adults kick their smoking habit or encouraged teens to pick up the habit. “The troubling reality is that e-cigarettes are the most commonly used tobacco product among middle and high school students, and flavors are identified as one of the top three reasons for use,” said Scott Gottlieb, FDA commissioner. Right now, the FDA is in the early stages of gathering information and has no set a timeline for regulation.

Another issue to consider is whether or not the “juices” and flavorings used in e-cigarettes are even safe. The FDA has already determined that they are safe to eat, but that does not necessarily mean they are safe to inhale. Some flavor additives have shown to cause inflammation in animal lungs. While this is not to say that these additives are dangerous for human consumption, it does call for more research to be done.

If passed, the SAFE Kids act would give vape manufacturers one year to prove that their products help adults break their smoking habit and do not tempt kids to start vaping. If they cannot do so in the time allowed, then they will be forced to pull their products from the shelves, and essentially go back to the drawing board if they ever hope to have their products back out available to the masses.